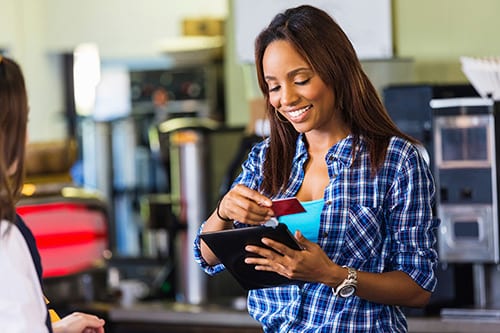 What would happen if you were at the grocery checkout, your cart filled with groceries for the week, and when you swiped your debit card to pay — it got declined? Would you feel embarrassed? Panicked? Would you have enough cash in your wallet to pay the bill? We want you to know that you have options available to avoid this situation.

We understand that from time to time, you may accidentally overdraw your checking account. That is why we have steps in place to protect you from being charged excessive fees and from having overdraft items returned.

In the event that you overdraw your account, Lanco FCU will first attempt to pay the overdraft item by transferring money from your share savings. This is the best option for covering an overdraft item because it incurs only a minimal fee.

If your share savings account cannot cover the item because there are not enough funds or because it has reached its transaction limit under Regulation D, your overdraft may be covered by Overdraft Privilege.*

Overdraft Privilege is a feature offered for eligible accounts at the discretion of Lanco FCU. This means if you maintain your eligible account in good standing, we will consider, without obligations on our part, payment of your reasonable overdrafts.

Overdraft Privilege carries a limit of $500.00 and is accessed only when your overdraft cannot be covered by an Overdraft Transfer from your share savings.

When an overdraft item is paid through Overdraft Privilege, you will avoid the returned item fees that a merchant charges. Plus, your reputation will be unharmed as the merchant will never know that your account had non-sufficient funds.
Expanded Overdraft Privilege

Once your account is eligible for Overdraft Privilege, your everyday debit card and ATM transactions are automatically covered by Expanded ODP.

and enjoy the benefits of your local Credit Union.
See Member Benefits